First conceiving of the idea in the 1990s, Toguo executed the work Urban Requiem (2015) for the 56th Venice Biennale (2015) curated by the late Okwui Enwezor. For the Independent, an intimate iteration of the installation presents an arrangement of ladders weighed down with life-size portrait busts sculpted from Iroko wood. Arranged like toppled heads on the shelves, the busts’ flat bases are visible to the viewer; carved with slogans of recent protests and national movements, each sculpture functions as a stamp. The process of stamping parodies administrative gestures, as they require significant effort to lift and coat with black ink before making a thickly crusted mark on paper. Accompanying the installation are the resultant prints, bearing slogans from #MeToo to #BlackLivesMatter.

Also on view, a series of watercolor paintings demonstrates Toguo’s versatility in media. The artist’s dreamlike paintings depict human, animal and plant forms in ink and wash; skillfully applied layers of liquid pigment allowing the abstract renderings to merge and morph into each other. Toguo dissolves the boundaries between man and nature, initiating a conversation about our relationship to the environment and binding issues of ecology to society. 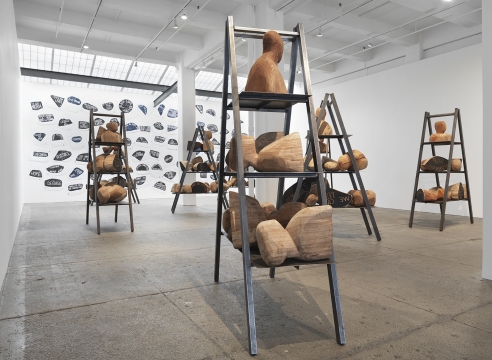 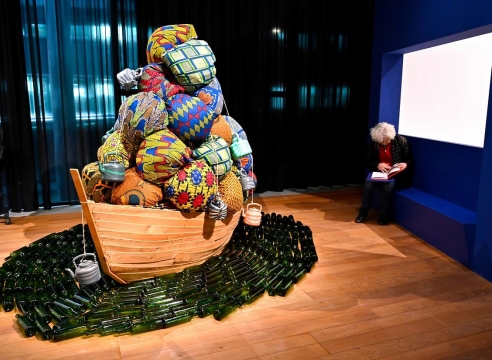