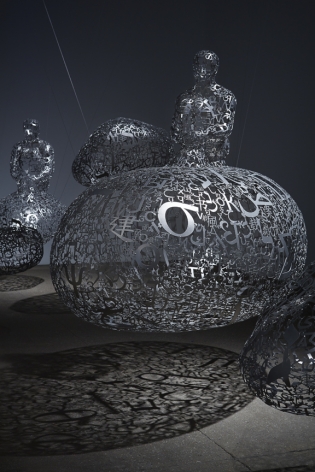 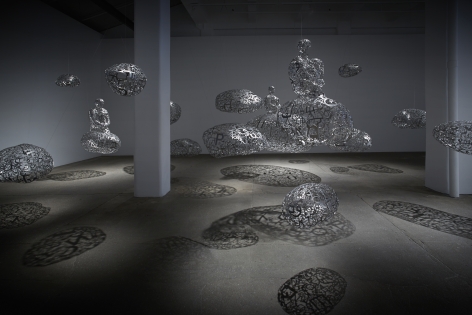 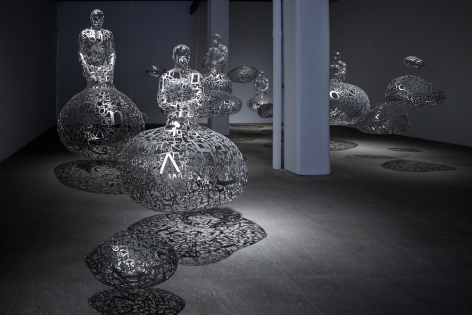 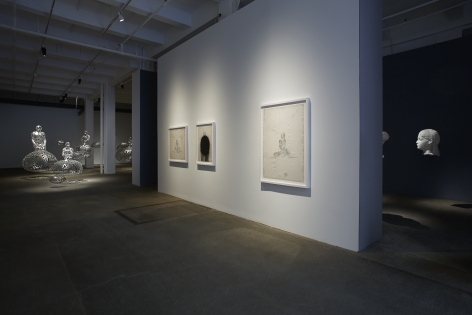 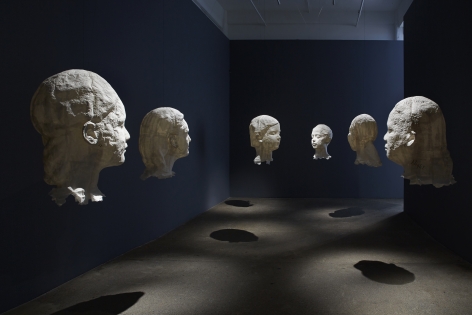 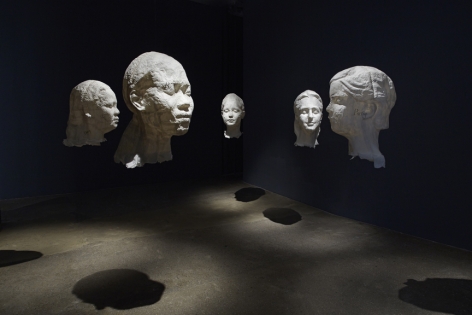 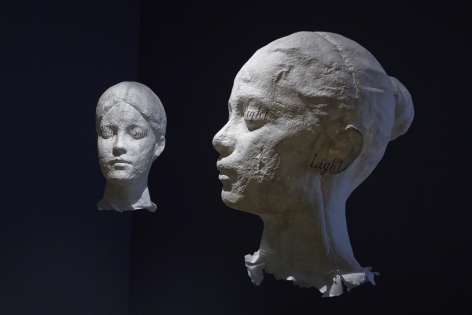 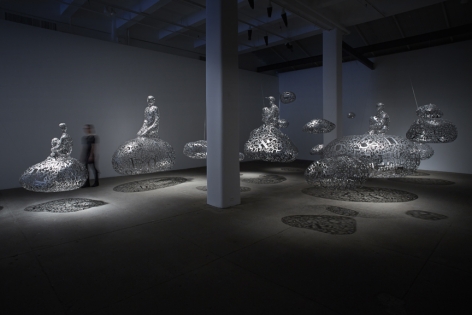 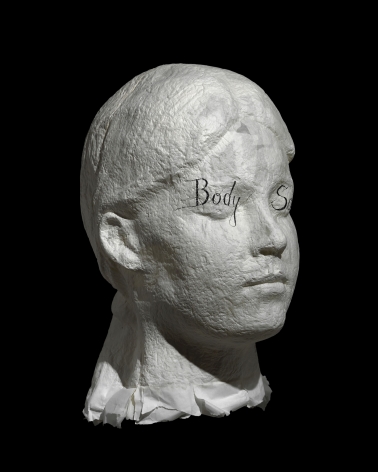 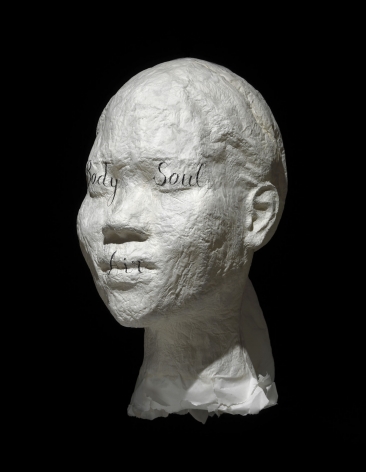 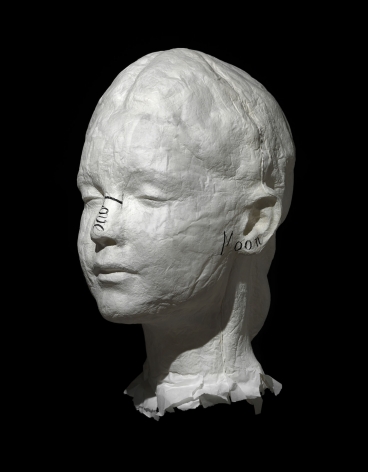 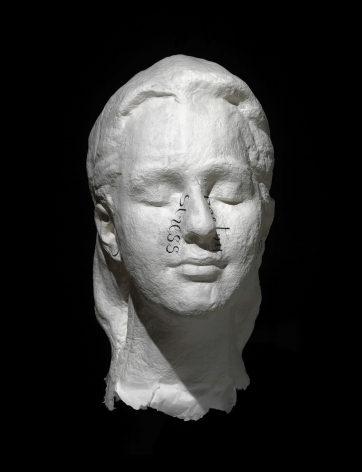 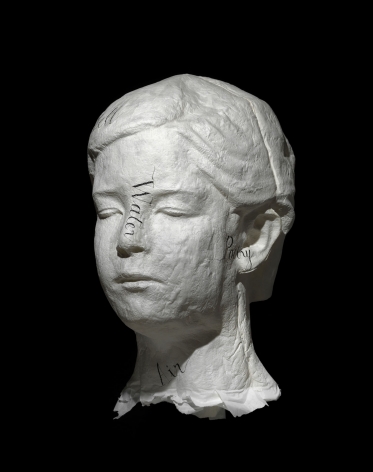 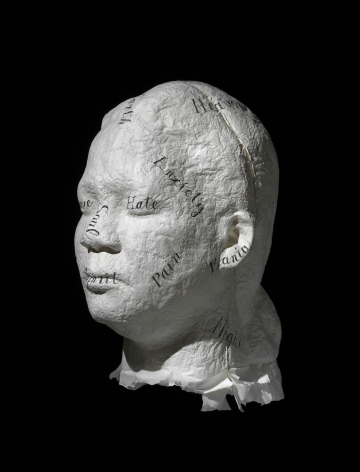 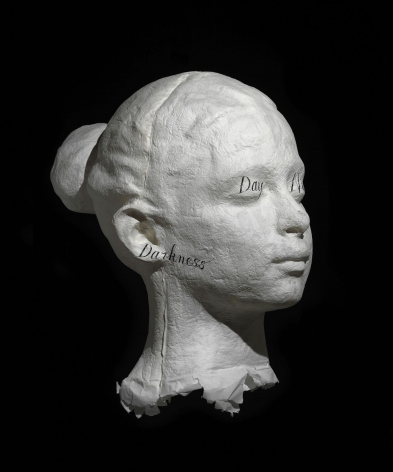 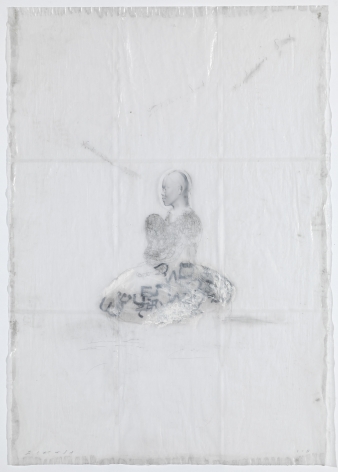 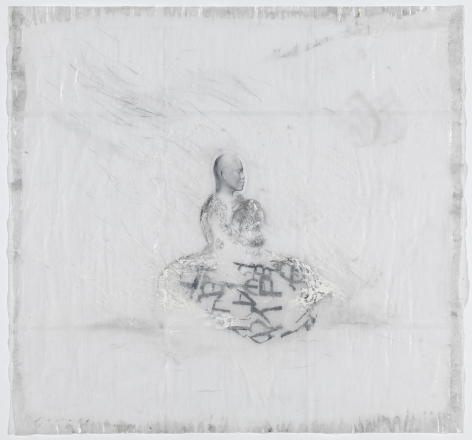 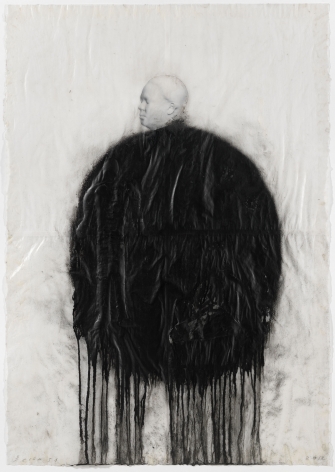 An immersive installation of new stainless steel sculptures, suspended cast paper heads, and recent drawings comprise Jaume Plensa’s solo exhibition, Talking Continents, at Galerie Lelong. These distinctive elements make a realized whole connected through the artist’s concept - formal language and dialogue - with the gallery’s physical space. As in all the artist’s works, the tension between the individual components - poetically imagined as islands or continents - and the overall installation encourages us to think about the ways in which we are linked as a collective humanity. Talking Continents demonstrates Plensa’s ability to create thought-provoking work that reimagines and represents the human figure with an original and innovative language. The artist will be present for the opening on Friday, November 1st from 6-8PM.

Letters from world alphabets literally form the connective elements in Talking Continents, the multi-part stainless steel installation in the main gallery. This series of suspended sculptures are hand-assembled from die-cut letters of nine international alphabets, the shapes of which the artist finds very beautiful. The letters work to form a more complex figure that is not a singular individual but rather a universal embodiment of humanity. Talking Continents creates a place where people are encouraged to meet, observe, and contemplate while engaging in a dialogue that inspires inward reflection and also a sense of global unity. The idea of continents and their interconnectedness has accompanied Plensa’s work from the beginning. In the darkened gallery space, each work is illuminated to create striking light and mysterious shadows.

Installed in a circular configuration in the small gallery are a series of cast paper heads onto which Plensa has “hand-tattooed” words. The use of diverse letters, signs, and language in his work shows the intricacy of different cultures and also how people can encounter one another and through a universal language learn acceptance and tolerance. When creating these works Plensa allows the idea to drive the materials, never constricting himself to one medium. His oeuvre continues to expand, while remaining committed to a lifetime idea. Plensa says, “I never stand out for technique, I stand out for ideas. Ideas make a work contemporary, not technique.”

2013 marks a series of events for the renowned artist. At the end of May Plensa presented a cast iron sculpture, Rui Rui, in Venice for the exhibition, Glasstress: White Light/White Heat, a collateral event of the 55th Biennale. In June eleven sculptures were installed throughout the public spaces of Bordeaux, France for the exhibition Jaume Plensa in Bordeaux and two cast iron heads, Marianna W and Chloe, were show in the UK. In 2014 recent works by the artist will be on view in Chicago to celebrate the 10th Anniversary of Millennium Park, home of Plensa’s famed Crown Fountain.

Jaume Plensa
Back To Top