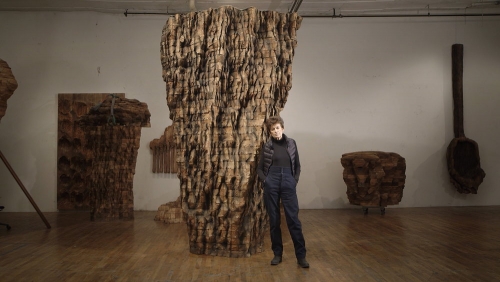 Galerie Lelong & Co., New York, is pleased to announce the upcoming New York City premiere of URSULA VON RYDINGSVARD: INTO HER OWN (2019).

In INTO HER OWN, filmmaker Daniel Traub nimbly illuminates the fascinating journey of Ursula von Rydingsvard (b. 1942) – her difficult early life in a family of nine emigrating to the US after five years in post-WWII German Displaced Persons camps, a traumatic first marriage, her arrival in 1970s New York to establish herself as an artist, and the staggering, triumphant body of work she subsequently produced.

The sculptures are massive, yet strangely intimate. Some feel imbued with an almost primal energy: a series of early installations reminiscent of wings in what became New York’s Battery Park; a monumental yet inviting piece outside Brooklyn’s Barclays Center; the stunning “Scientia” at M.I.T. which evokes the power of nature and the firing of brain synapses.

Interviews with luminaries such as artist Sarah Sze and museum director Adam Weinberg, as well as the artist herself are intertwined with studio visits and behind-the-scenes footage of her mammoth creations being installed. All combine to show how, through sheer talent and determination (and countless planks of cedar), she has become one of the world’s greatest artists (and one of a very few women) working in monumental sculpture.

"Von Rydingsvard’s favored forms are massive. They slump on the floor like hollow, tuberous mounds into which it’s tempting to crawl; or jut out from the wall; or else rise up like inverted megaliths or weathered geological forms. They’re dramatic, sensuous, but at the same time almost accidental, as if shaped organically by wind and water."
– Sebastian Smee, Art Critic for The Washington Post, March 2019

Held on May 31, 2020, watch a recording of the virtual Q&A between Ursula von Rydingsvard and Daniel Traub, moderated by Molly Donovan, curator of contemporary art at the National Gallery of Art.

Watch the film here
Back To Top